Over the last few weeks, we have been actively seeking the turtles that have been carrying transmitters.  The devices have been functioning well and sending data daily, but are soon to exhaust their battery power.  Though its never guaranteed, the advantage to retrieving the transmitters is two-fold; first, the data set archived within each unit is many times larger than that sent via satellite, and second, they can be re-furbished and deployed again on additional turtles.

On Saturday, after several visits to the reef ‘neighborhoods’ these turtles are known to frequent, I finally came across Hawksbill #145, also known affectionately as “Sputnik”  to local divers (see Doug Kahle’s photo below), who had been carrying its transmitter around north-Breakers reef since last August.  A little crusty for sure, but still in working order! Many thanks to Wildlife Computers Inc. for providing such quality products.  I look forward to presenting all of the data the transmitters have to offer over the next few months.

Thanks also to John Harman and his group from the Atlantic Edge Dive shop in Maryland.  This was their third trip here to learn all about Florida’s sea turtles, and their support of the Florida hawksbill Project is greatly appreciated, as is the support of Captain Van and the Narcosis Dive Charters.  We all had a great time, and although it was kind of gooey on the reef, it was really neat for them to be here to see the giant barrel sponge spawning! 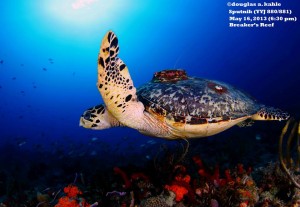 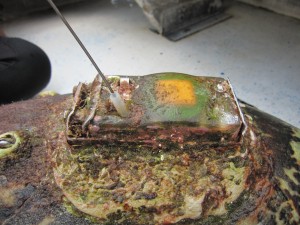 Since the beginning of the year, the hawksbill surveys have been primarily focused in the northern end of Palm Beach County on the 60-90′ reefs of Juno and

The Florida Hawksbill Project has now joined forces with the National Save the Sea Turtle Foundation of Ft. Lauderdale Florida.  The Foundation has been a strong supporter of the Hawksbill

Thanks to Gumbo Limbo Nature Center for hosting its 8th annual “Sea Turtle Day” on March 2nd.  It was a pleasure to set up the Florida Hawksbill Project Booth!