Hawksbill sea turtles (Eretmochelys imbricata) are medium-sized sea turtles that are found  in tropical and sub-tropical seas around the world.  Attaining an average weight of about 150 lbs., they are uniquely connected to coastal environments that house sea sponges, their primary food source in most parts of their range.  As a result, hawksbills are usually encountered on or near coral reefs, where they are believed to play an important role in coral reef community ecology.  Hunted to near-extinction to supply the ‘tortoiseshell’ trade, hawksbills are now considered Critically Endangered throughout their range; and are protected by State, Federal, and International laws.

Hawksbills are are characterized by having a comparatively long, narrow, bird-like ‘beak’, pointed marginal scales along the rear-end, and scutes that slightly overlap one another, much like shingles on a roof.  The scales of the flippers are usually black with gold to white margins, and the scales of the head are generally yellow to cream colored and filled with varying amounts of black pigment that make the head appear darker from above than the side. 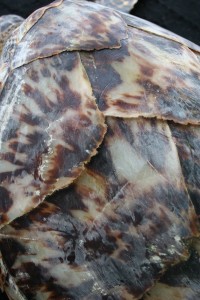 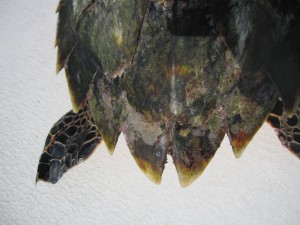 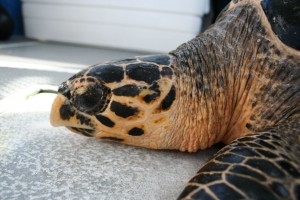