**The research activities associated with the Florida Hawksbill Project have been reviewed and permitted by State (FWCC) and Federal (NMFS) agencies since 2004.

One of the first things we learned about the Palm Beach aggregation is that there are many more hawksbills than were expected!  So far, 167 individuals have been captured and tagged in as many days out looking for them, and we continue to encounter new individuals.  This large number indicates how supportive the reefs of Palm Beach County are for young hawksbill turtles, which may have regional significance for their overall recovery.

The hawksbills of Palm Beach are primarily sub-adults, or “teenagers”. Hawksbills, like other sea turtles, can be found in different geographic locations  based on their life-stage.  We call the reefs of Palm Beach County “developmental habitat” for young turtles who will someday depart to spend the rest of their lives elsewhere as adults.   Because they are youngsters, their gender cannot be determined externally, but we have used blood samples to estimate the male:female ratio at about 1:2.5.

Once tags are placed on a turtle, it can be distinguished from others.  When these individuals are encountered repeatedly,  we gain valuable insight to their movement and growth patterns.  Dozens of tagged hawksbills have been reported within the study site, some individuals since the inception of the study in 2004, all within close proximity to where they were captured.  Those that have been re-measured after at least one year grew (on average) 2.5 cm per year.  These results suggest that at least some of the hawksbills found in the study site may remain there for the duration of their sub-adult life- stage, which is likely to be around 15 years.

The maps below depict the movements of hawksbills that were tracked by satellite for about a year each just offshore of Palm Beach Island, Florida. 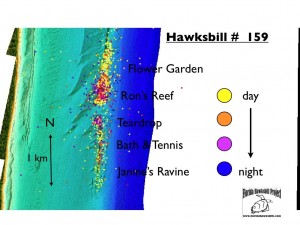 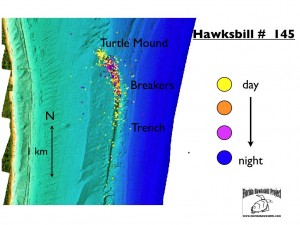 Female sea turtles are famous for traveling long distances to return to their natal beach to nest.  This marvelous trait allows us to genetically “fingerprint” sea turtle populations due to subtle differences in DNA sequences that have developed between various regional sub-populations.  Since we know that the hawksbills of Palm Beach did not come from Florida (hawksbills don’t nest with any regularity here), we were curious about their origins, and by extension, their future destinations.  Turns out, most hatched on the beaches of Mexico’s Yucatan Peninsula! 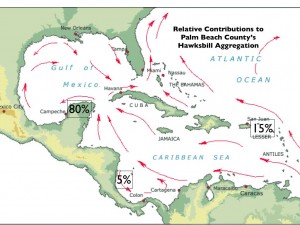 For a detailed characterization of this aggregation, see the following .pdf document:       Wood_etal_2013